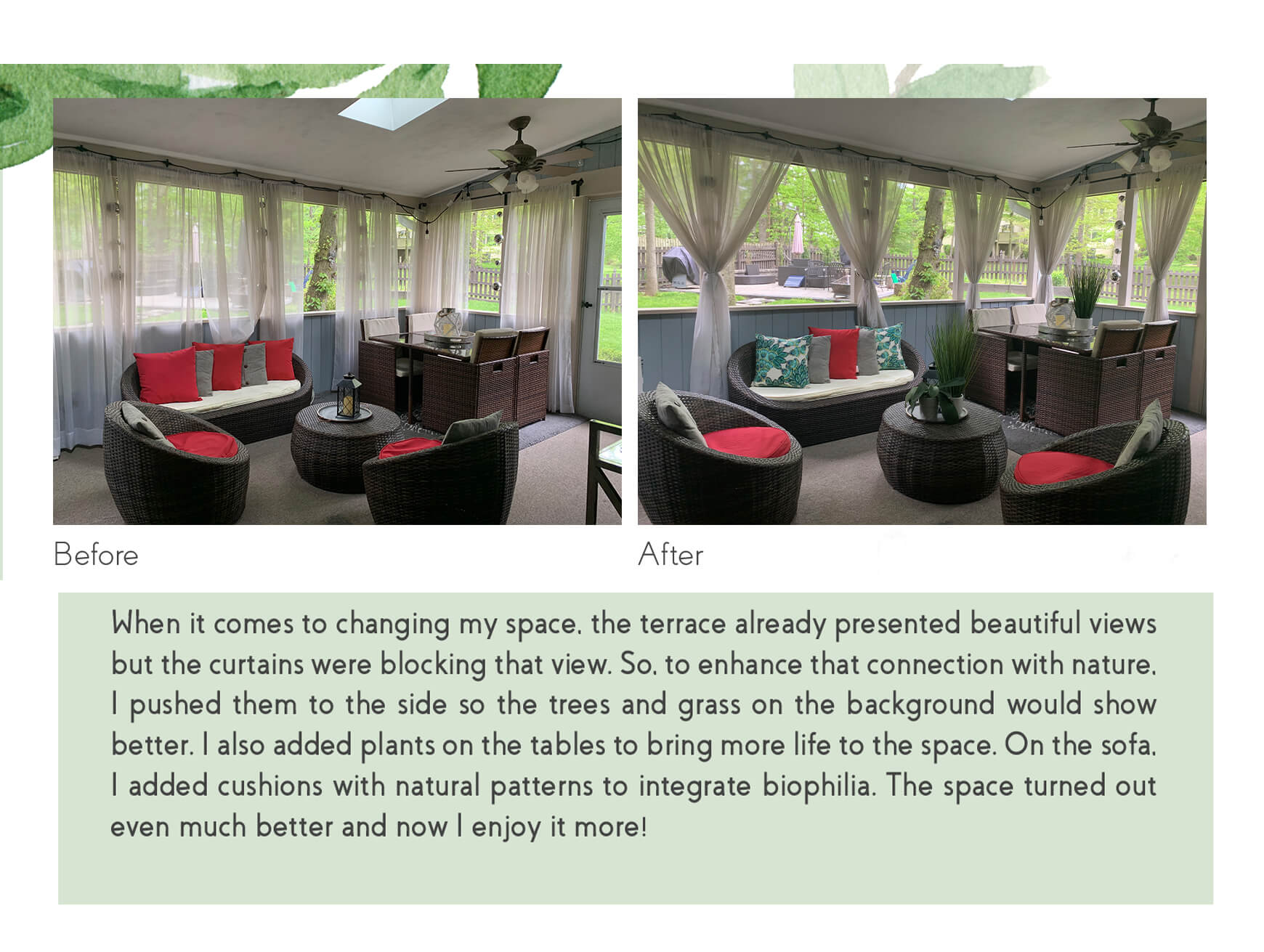 Photo Credit: CNS/courtesy Ana Garcia - This is a storyboard completed by Ana Garcia for an online architecture class at The Catholic University of America in Washington, D.C. The before-and-after photo shows the changes she made to her workspace to enhance biophilia elements, natural lighting and connection to nature.

Robin Puttock gave the students in her architecture class at The Catholic University of America in Washington an unusual assignment — to consider how the design of a workspace affects mental health.

“We had been looking into how the building affects your well-being and how your brain reads the room,” said Brianna Booth, a student of Puttock’s class in neuroarchitecture for well-being. “Being stuck in a same room, how does your brain react? It was an interesting task.”

Puttock, a visiting assistant professor at The Catholic University of America, changed the final for her class from a written paper to a more interactive case study that analyzed the effects of your workspace on your mental health.

She said her idea of the class and case study came from reading the story of Jonas Salk, the scientist who discovered the polio vaccine, and how he was inspired by a 13th-century Franciscan monastery.

Jonas Salk researching at the University of Pittsburgh in search for the cure, but he found himself stuck. He decided to take a retreat at a Franciscan monastery at the Basilica of St. Francis of Assisi in Italy.

Salk found inspiration through the Romanesque and Gothic architecture style of the monastery. He attributed his breakthrough discovery to the intuitive thinking he had within that monastery.

From Salk’s story, Puttock herself was inspired and thought it was appropriate to get her class to apply the same concepts to our current time during a pandemic. The case study consisted of seeing how external factors such as lighting, acoustics and biophilic design affect your environment and mental health.

“Biophilic design” is a concept that aims to increase a workspace occupant’s connectivity to the natural environment.

“I developed this course to teach students how our environment affects our well-being,” Puttock told Catholic News Service. “With this pandemic, students were at home in isolation, and I saw their well-being was taking a hit. My students were down certainly in weeks three and four. I was like, ‘How can I combine what we are learning in class and apply it to the environment that we are being forced to live in with this pandemic?'”

Like every university in the United States, the classrooms were converted into online-only access in mid-March. As a result, Puttock said she made slight adjustments to her class and thought this case study could serve as a more interesting and interactive final for her students.

“The biggest shift that I made that I never did (before) in this class was (to tell students), ‘Go ahead and use what you learned and actually make an improvement in your environment,'” she added. “You can do it for free. You can move things around. Give yourself a better view. Or spend $20 on a can of paint. Paint your room a different color.”

People are isolated, working from home and are spending a majority of their time at home. Puttock said she noticed her students seemed a little more down before the case study. After the students made the changes to their workspace, she noticed they were more joyful.

“Students got so excited,” said Puttock. “They were just joyful when we would have our Zoom classes. They would just be smiling and so happy. They would say, ‘This is so great. My life has changed because I put some plants on my desk. I feel so much happier.'”

Students recorded data by analyzing their own behaviors and comparing how they felt in certain spaces before and after renovation. From the data, it showed the students felt they could concentrate more, felt enlightened and overall were in a better mood.

Maria Niedziejko, a recent graduate and first-year master’s student, said she started by opening her windows to get a cross breeze into her room as well as nature sounds from her environment.

“We choose a spot to work for 15 minutes and filled out a sheet about our emotions before and after,” Niedziejko told CNS. “We looked at the biophilic stuff so if there were patterns in our area or if there were materials in our area like daylight or windows.”

Booth said she is working with a school for girls in Kenya, and their goal is to make architectural improvements to the library for the benefit of the girls. She has used the concepts in Puttock’s class to make those improvements.

“We are looking into how the exterior lighting can light the widen the space up,” said Booth. “How they can have that indoor-outdoor connection.”

Niedziejko said she is planning on pursuing a career in civil architecture, and she said she believes that people are refocusing the idea that architecture does have influence on your mental health.

“I feel that well-being has been something that architecture has been lacking in the past,” said Niedziejko. “We are definitely making strides for improvements into the future. I think this pandemic will really reinforce the idea of well-being and the environments that we build and work in.”

“I think especially schools and hospitals need an increase in biophilic design because it does improve their health,” she added. “Like in the hospital, not only the patients but also the doctors and nurses do benefit by the design.”

Moving forward, Puttock is planning on continuing the case study next semester and she hopes to compare data. She said she would like to see how it would be different for students who were forced to live in home and work spaces versus students who voluntarily did it.