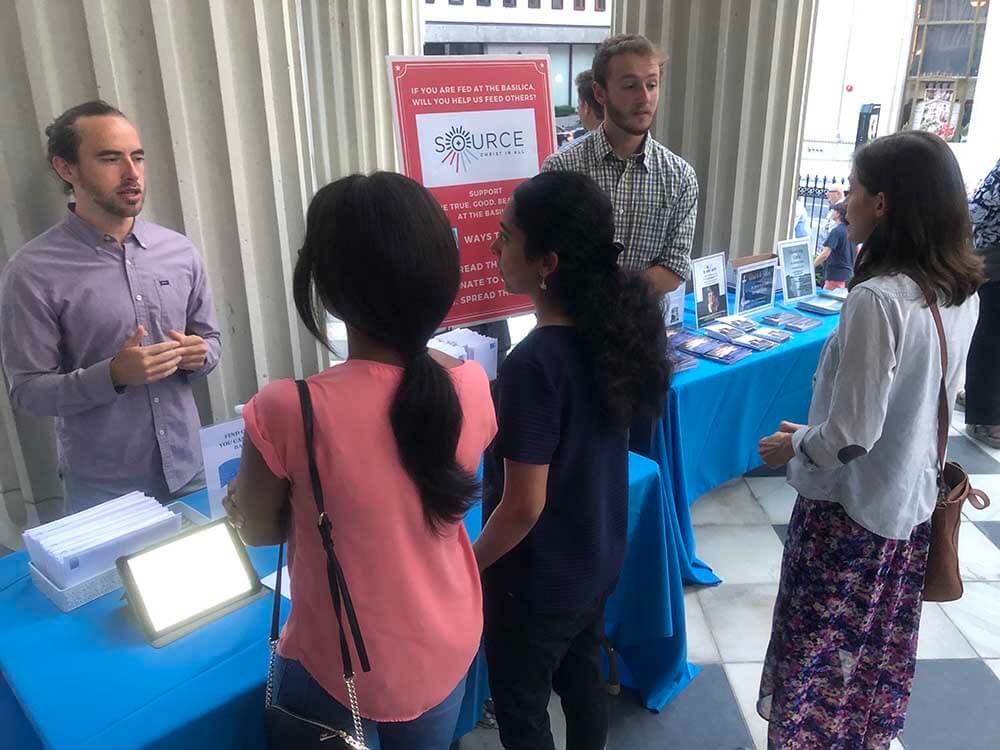 Photo Credit: Catholic missionaries bring Jesus to Baltimore streets - Colin Miller and Nathan Belk, urban missionaries with the Source of all Hope outreach, answer questions about their new ministry following a recent Mass at the Basilica of the National Shrine of the Assumption of the Blessed Virgin Mary in Baltimore.

Colin Miller and Nathan Belk are spending their days walking through the streets of downtown Baltimore. In their backpacks they might carry some clean pairs of socks for a homeless person or a bottle of water.

But they are also carrying with them the word of God and the presence of Christ.

Miller and Belk are the first two urban missionaries who are working with a new initiative, the Source of All Hope, based at the Basilica of the National Shrine of the Assumption of the Blessed Virgin Mary in the heart of downtown Baltimore. The project was officially launched on the church’s patronal feast day, Aug. 15.

Father James Boric, rector of the Baltimore basilica, said the program is modeled after the Fellowship of Catholic University Students (FOCUS), where young people give a year of their life to evangelize on college campuses. Similarly, these missionaries have made a one-year commitment.

“We need to do that in the city,” he said. “Instead of ministering to people in universities, they’re going to minister to the people right here on the streets of Baltimore.”

In his homily, Father Boric said it was no coincidence that the Source of All Hope was being launched on the feast of the Assumption.

“After Mary conceived of Jesus in her womb, she did not keep him to herself. She gave birth to him, raised him and then gave him to the world — to bring hope to those who were hopeless — so that others could be united with him and proclaim the Magnificat for themselves.”

Miller and Belk, both from Maryland, will reach out especially to those who are homeless, addicted or struggling in other ways. “They’re going to get to know their stories,” Father Boric told the Catholic Review, diocesan newspaper of Baltimore. “They’re going to love them. And they’re going to begin to give them the hope of the Gospel.”

To those who might say they don’t need Jesus, they just need a sandwich, the priest said you need both. “So yes, they do need a sandwich. Christ said if you see someone in need, you have to help them, and not just say you are going to pray for them.

“But social justice without God isn’t going to get anybody to heaven. So, what we need to do is we need to give them the sandwich but then we need to bring them into relationship with the one who is the creator of not only the sandwich, but them,” Father Boric said. “And by doing both, a lot of good can happen.”

Belk and Miller said Aug. 15 they had already spent a few days on the streets getting to know the territory.

“There is a lot of suffering on the streets,” said Miller, who just spent a year working in a homeless shelter in the Bronx, N.Y.

“Our program is called the Source of All Hope because we believe that Jesus is the source of all hope. In addition to encountering Him in the sacraments and the Eucharist, that’s what’s going to give us the strength to minister to all the people we encounter,” said Miller.

Accompanying people who are living on the streets can be challenging, but getting to know them and accompanying them, “seeing Christ in them and allowing Christ to transform that relationship, is huge,” he added.

The missionaries live in the basilica’s former convent. They start their day with morning prayer and Mass. They head out into the streets either in the morning or the afternoon and will eventually work on standard “routes” that take them through various parts of the neighborhood. Some homeless people tend to be out in the mornings, others in the afternoon, so they get to encounter different people at different times of the day.

They end their day with a holy hour in front of the Blessed Sacrament, and evenings sometimes include spiritual talks or times to discuss the ministry with Father Boric and others.

Father Boric has plans to recruit a couple more missionaries. While FOCUS missionaries generally must raise about $30,000 a year to cover their expenses, the priest wants to be able to provide all of that so the missionaries can focus on their ministry.

“I need to provide everything, except for their own health insurance — that’s the one thing I can’t provide for,” Father Boric said. He donated his old 2008 Toyota Corolla to the project as the “mission car.”

“I’m trying to raise money through the internet and through donors to be able to have these guys just be able to focus on the prayer and on outreach in the city so that their days aren’t spent trying to figure out how they’re going to raise enough money to eat.”

A Find Your Greatness program last month at St. Monica Parish in Barre focused on four habits to [...]