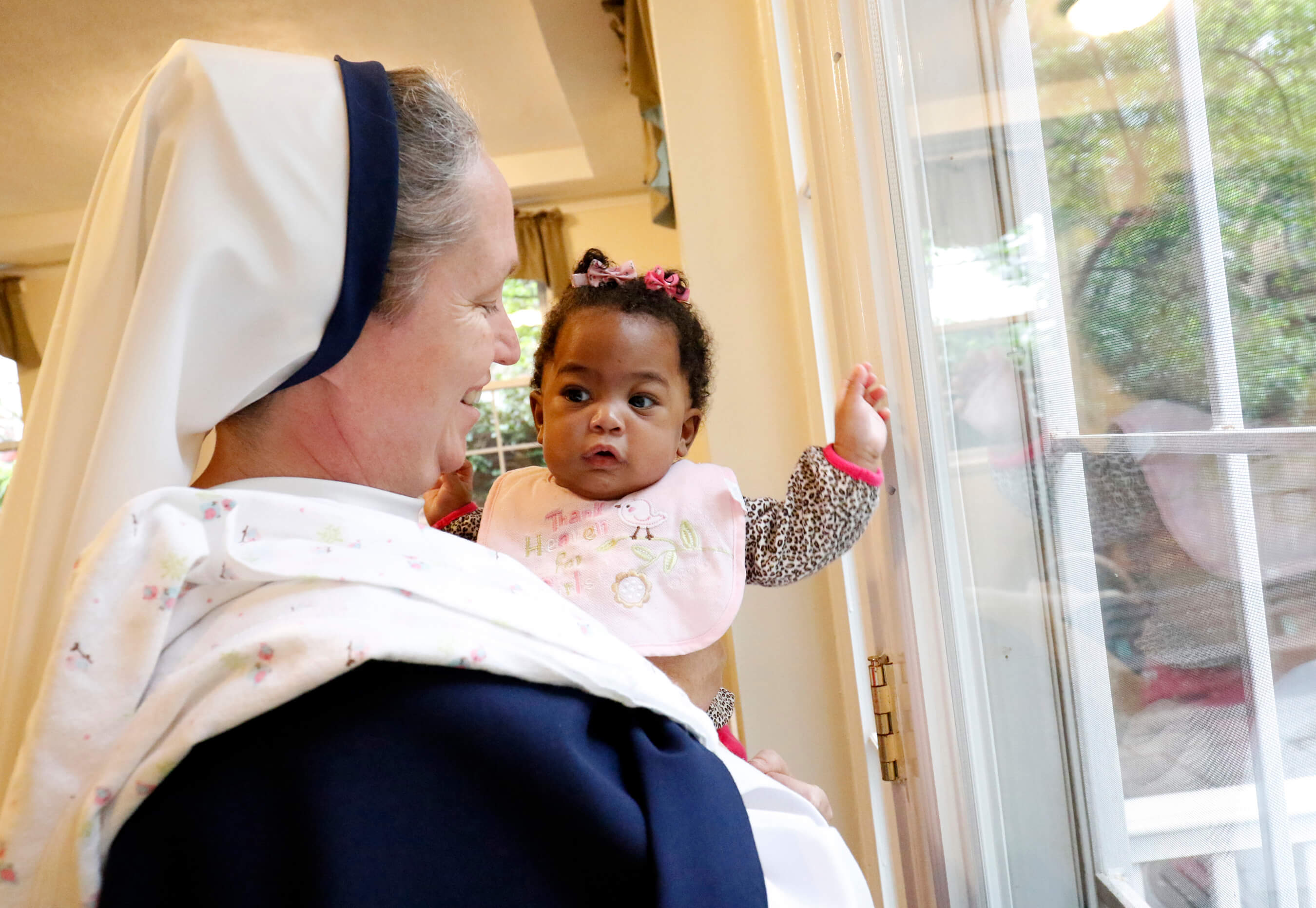 Standing in the modest living room of a convent that Sisters of Life share with expectant and new mothers and their children, the cardinal reaffirmed the commitment first made in 1984 by his predecessor, Cardinal John J. O’Connor.

“Any pregnant woman can come to the Archdiocese of New York, to its parishes and facilities, and we will do all in our power to assist you, so that you never feel that you have no alternative except an abortion,” Cardinal Dolan said. “It does not matter what your marital status, your religion or your immigration status might be. None of that matters.”

Cardinal Dolan acknowledged that the timing of his reaffirmation of the Church’s outreach coincided with the attention given to the Reproductive Health Act of 2019, which effectively removed restrictions on abortion in New York, and the current “almost pro-abortion atmosphere out there.”

“Every once in a while we need to trumpet and put a spotlight on the good work that we do,” the cardinal said. “Most of us bristle when the Church is criticized for speaking all the time but not offering action. Nothing could be further from the truth.”

Cardinal Dolan said he was worried that poor women especially were getting the impression that abortion is their only choice. “This is a very teachable time for us to stand up and say, ‘We’re here. We love you. We welcome you. There is an alternative here and we’d be honored to serve you.'”

Mother Agnes Mary Donovan, superior general of the Sisters of Life, said her group has provided assistance to more than 9,000 women since the religious community was established in 1991, and they have shared their convents with pregnant women since 1996.

“We are standing in radical solidarity with women during an unexpected or difficult pregnancy. The sisters and the woman together find a pathway through fear, a pathway defined by realistic and ongoing emotional and practical support that she may respond with courage and dignity to one of life’s most difficult moments,” she said.

Mother Agnes Mary said the Sisters of Life serve 600 to 1,000 women each year. She said their message to vulnerable pregnant women is: “Know you are not alone. We believe in you. This pregnancy does not mean your life and your dreams are over. We stand ready to help you realize the deepest desires of your heart.”

She said approximately 85 percent of the women who contact the Sisters of Life for counsel “will choose to bring life to their child. We provide critical and strategic support that is timely and important to her life,” she said.

While her toddler captured all the attention in the room, an Ethiopian professional runner named Brhane described meeting the Sisters of Life in New York. It was when she was pregnant, alone, far from home and feeling pressure to abort her baby, she said.

Brhane named the little girl Sena Love, which translates, “I love my history.”

The Sisters of Life helped Brhane to run the New York Marathon, and she is training to run professionally again, she said. “I love my daughter. She changed my life. I am so happy. Thank you God.”

Dr. Anne Nolte, director of the Gianna Center for Women’s Health and Fertility, said her medical practice provides primary care and reproductive health care to women and teenagers that aligns with church teachings. The center offers service to patients of all backgrounds and has “a particular commitment to helping women whose babies have an adverse diagnosis in the womb,” Nolte said.

Chris Bell is a co-founder with the late Father Benedict Groeschel, a Franciscan Friar of the Renewal, of five Good Counsel residences in New York and New Jersey for homeless single pregnant women and their children. He said his group provides “concrete help and real hope” to women in crisis.

Since 1985, Good Counsel has served more than 7,800 mothers and children with more than 755,000 nights of shelter as well as material aid, counseling, parenting and education programs.

The Good Counsel homes have a 100 percent occupancy rate, and women are invited to stay for up to a year to reap the maximum benefits of the program, Bell said.

Msgr. Kevin Sullivan, executive director of Catholic Charities of the Archdiocese of New York, described a network of 90 affiliated agencies that provide dignified, compassionate care to people in all stages of life. “Our door is open,” he said.

The speakers said their services are free or low-cost and available to all women regardless of race, religion, background or ability to pay.

Cardinal Dolan acknowledged the hurt, frustration and anger people in the Archdiocese might feel at the new abortion law. “We should not respond with bitterness and divisiveness, but put our faith and trust in the Lord and reach out with love to troubled moms and their babies,” he said.

He said it would be a good time for people on both sides of the abortion debate to come together to discuss providing “life-giving alternatives to the horror of abortion.”

Share This Post
Cardinal Timothy Dolan, Respect Life, abortion, Marriage and Family, Sisters of Life
See More
Last Article
Dog sledding for a cause in Derby Line
Next Article
To know God is to know love, pope says
Back to Vermont Catholic Magazine