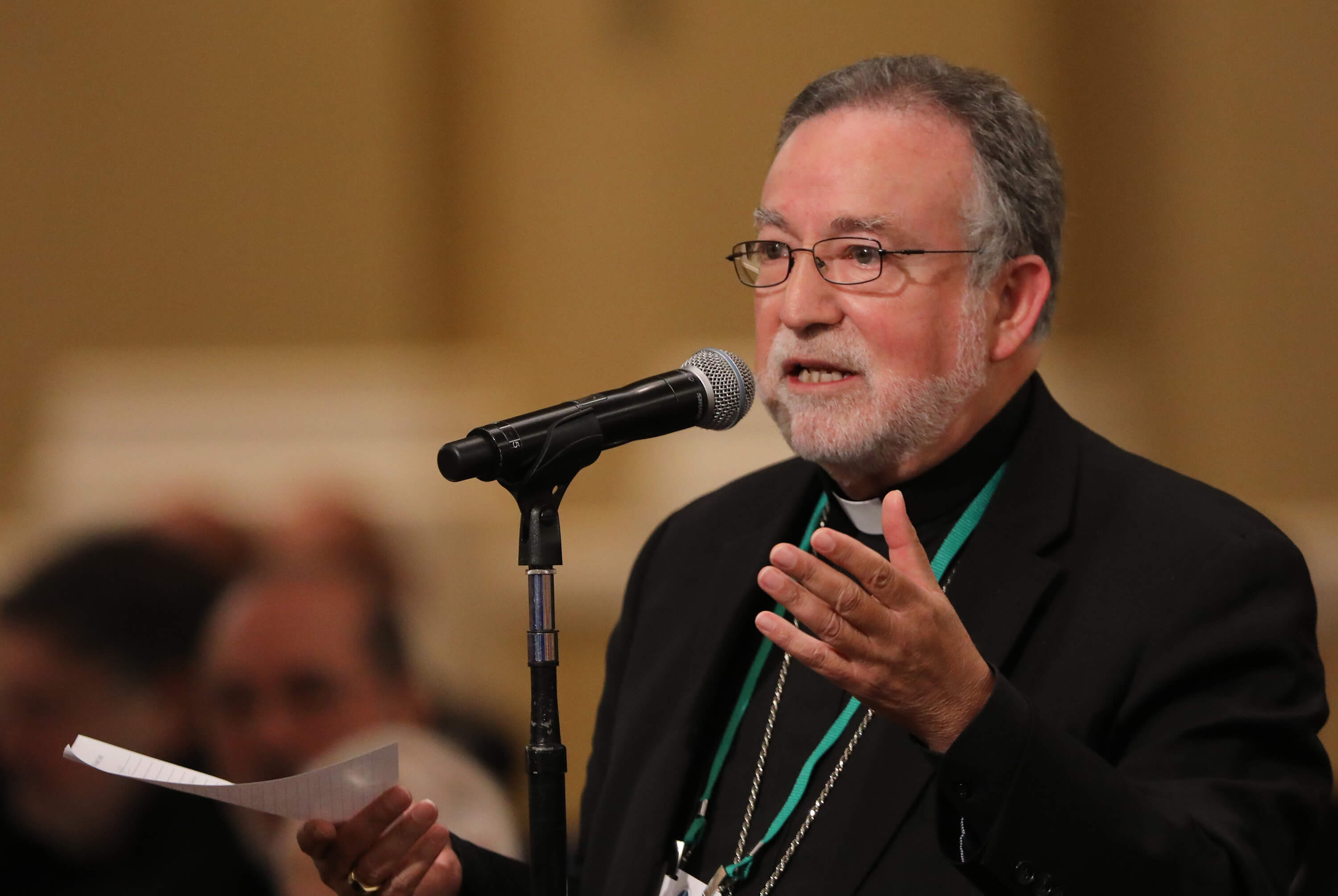 Photo Credit: CNS/Bob Roller - Bishop Jaime Soto of Sacramento, California, gestures as he speaks from the floor at the spring general assembly of the U.S. Conference of Catholic Bishops in Baltimore.

Bishops urged to do more for immigrants, spiritually and otherwise

Catholic bishops urged their fellow prelates to do more to support the suffering of immigrant families, to be with them spiritually as pastors and to voice support for legal measures to help them.

“It’s so important that our works match our words on this issue,” said Bishop Jaime Soto of Sacramento, California, commenting June 11 after a presentation by the working group on immigration issues for the U.S. Conference of Catholic Bishops.

Two bishop members of the group, Archbishop Jose H. Gomez of Los Angeles and Bishop Joe S. Vasquez of Austin, Texas, gave an update of what the U.S. Church is doing at the national level and in certain regions of the country when it comes to immigration issues. The spoke on the first day of the USCCB’s spring general assembly in Baltimore June 11-13.

“I ask you, brothers, to reach out to senators and encourage them to support legislation” endorsed by the USCCB’s Committee on Migration, said Bishop Vasquez, the committee’s chairman.

One includes a bill that recently passed in the U.S. House of Representatives that proposes a path toward permanent legal status for youth brought to the country as children illegally and for beneficiaries of Temporary Protected Status, popularly known as TPS. The status grants a work permit and a reprieve from deportation to certain people whose countries have experienced natural disasters, armed conflicts or other exceptional situations.

“We can also redouble efforts to offer spiritual support and access to legal and social services to affected families,” said Bishop Vasquez. “It is vital that they feel supported by the Church during this time of uncertainty.”

From efforts urging humanitarian help for recent arrivals to asking the government to increase the shrinking number of refugees allowed to resettle in the country, the two bishops from the immigration working group seemed to relay a struggle with the Trump administration and some members of Congress over a variety of immigration policies.

In addition to drastic cuts to the refugee resettlement program, the current administration has targeted the population of immigrants in the country illegally as well as existing legal immigration programs, said Bishop Vasquez.

“The result is continued uncertainty” for a variety of groups of migrants, he said.

Another pressing matter, Bishop Vasquez said, is the situation along the U.S.-Mexico border, which is seeing a burgeoning number of families seeking to escape violence or poverty in countries such as El Salvador, Honduras and Guatemala, and the growing limits on their rights to petition for asylum. Some are asked to wait in dangerous places in Mexico because of a current policy.

“We are concerned about this policy as it leaves vulnerable people in harm’s way in Mexico without access to social and legal services,” Bishop Vasquez said. “Families who are discouraged and are facing danger often go to remote spots along the border to try to access protection. We believe this is sadly what led to some of the deaths of young children in remote Border Patrol processing areas.”

At least six migrant children within the past year are believed to have died at the border while in the custody of immigration officials.

In certain parts along the border such as El Paso, Texas, the Rio Grande Valley near Brownsville, Texas, and Yuma, Arizona, “Catholic entities are the most extensive service providers” of aid for families, he said, and in many cases they provide humanitarian help for 600, and up to 1,000, people a day because the government is not helping.

“They work to provide for the needs of these tired families: a warm meal, a change of clothes and assistance with travel to a final destination. Brothers, the above mentioned dioceses along the border … they need more volunteers and more financial help to purchase items and assist in travel,” said Bishop Vasquez, asking for the bishops’ help in supporting those dioceses through the work of organizations such as the USCCB’s Migration and Refugee Services.

At the policy level, “we are working to engage with lawmakers and (Department of Homeland Security) officials to ensure better care for families and children along the U.S.-Mexico border. We are also urging more capacity for humanitarian response,” said Bishop Vasquez, adding that “we have been vocal with the administration publicly and privately about the need to look at root causes and to avoid addressing this issue from an enforcement-only perspective.”

Miami Archbishop Thomas G. Wenski also urged bishops to encourage efforts at the parish level, providing legal resources for immigrant parishioners who may have a remedy to their situation, encouraging parishioners who have delayed becoming citizens to do so now, and also providing English as a Second Language classes and civics lessons that could help those preparing to become citizens.

“The prospects for comprehensive immigration reform are very bleak,” he said, but there may be remedies for some who haven’t explored a possible solution to their immigration status.

And for those in detention centers around the country, “we, as pastors should be concerned that we have our priests there celebrating Mass for them, that the church is present to them in this area, even if it’s just Sunday Mass. We have to respond to them and not let the church be invisible to them,” Archbishop Wenski said.

“Regardless of where these threats come from, they will all hurt immigrant families,” Archbishop Gomez told his fellow bishops. “We’re working to prevent these measures and we will continue to do so, but we need your support, most of all, we need your voice against hostile actions and in favor for more humane policies.”

Cardinal Daniel N. DiNardo of Galveston-Houston, USCCB president, asked about unaccompanied minors and whether the administration could be persuaded to take different steps than detention. Cardinal DiNardo, along with Archbishop Gomez and two other bishops, traveled in July 2018 to the border to visit migrant children in detention centers and families at the border.

“To what extent is there a possibility of intervening with the administration on this?” he asked.

“We have tried to advocate strongly for the unaccompanied minors. … Our conversations have been basically status quo so we have not been able to make much inroads, ” Bishop Vasquez replied. “We have tried but we (have not) been successful.”