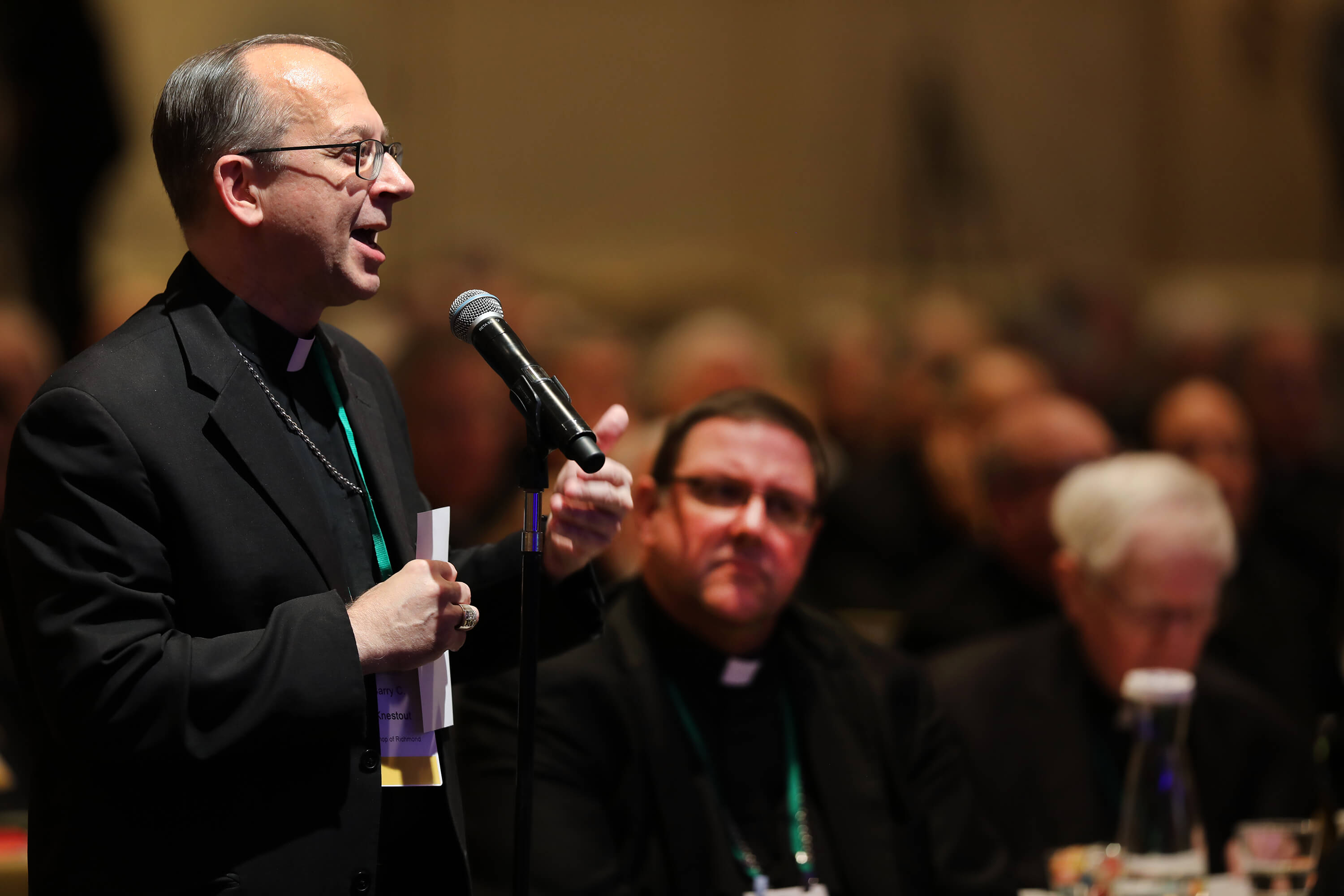 Photo Credit: CNS/Bob Roller - Bishop Barry C. Knestout of Richmond, Virginia, speaks from the floor Nov. 13 at the fall general assembly of the U.S. Conference of Catholic Bishops in Baltimore.

The U.S. bishops overwhelmingly approved a pastoral letter against racism Nov. 14 during their fall general meeting at Baltimore.

The document, “Open Wide Our Hearts: The Enduring Call to Love — A Pastoral Letter Against Racism,” passed 241-3 with one abstention. It required a two-thirds vote by all bishops, or 183 votes, for passage.

“Despite many promising strides made in our country, the ugly cancer of racism still infects our nation,” the pastoral letter says. “Racist acts are sinful because they violate justice. They reveal a failure to acknowledge the human dignity of the persons offended, to recognize them as the neighbors Christ calls us to love,” it adds.

Bishops speaking on the pastoral gave clear consent to the letter’s message.

“This statement is very important and very timely,” said Bishop John E. Stowe of Lexington, Kentucky. He appreciated that the letter took note of the racism suffered by African-Americans and Native Americans, “two pieces of our national history that we have not reconciled.”

“This will be a great, fruitful document for discussion,” said Bishop Barry C. Knestout of Richmond, Virginia, in whose diocese the violence-laden “Unite the Right” rally was held last year. Bishop Knestout added the diocese has already conducted listening sessions on racism.

Archbishop Joseph F. Naumann of Kansas City, Kansas, said he was grateful for the pastoral’s declaration that “an attack against the dignity of the human person is an attack the dignity of life itself.”

Bishop Thomas J. Olmsted of Phoenix said the letter will be welcome among Native Americans, who populate 11 missions in the diocese, African-Americans in Arizona — “I think we were the last of the 50 states to be part of the Martin Luther King Jr. national holiday,” he noted — and Hispanics, who make up 80 percent of all diocesan Catholics under age 20.

“This is very important for our people and our youth to know the history of racism,” he added.

Bishop Shelton T. Fabre of Houma-Thibodaux, Louisiana, chairman of the U.S. bishops’ Ad Hoc Committee Against Racism, said an electronic copy of “Open Wide Our Hearts” would be posted “somewhat immediately,” with a print version available around Thanksgiving.

“Also, there will be resources available immediately” now that the pastoral letter has been approved, including Catholic school resources for kindergarten through 12th grade, added the bishop, who also is chair of the bishops’ Subcommittee on African American Affairs.

“‘Open Wide Our Hearts’ conveys the bishops’ grave concern about the rise of racist attitudes in society,” Bishop Fabre said Nov. 13, when the pastoral was put on the floor of the bishops’ meeting. It also “offers practical suggestions for individuals, families and communities,” he said.

“Every racist act — every such comment, every joke, every disparaging look as a reaction to the color of skin, ethnicity or place of origin — is a failure to acknowledge another person as a brother or sister, created in the image of God,” it adds.

“Racial profiling frequently targets Hispanics for selective immigration enforcement practices, and African-Americans for suspected criminal activity. There is also the growing fear and harassment of persons from majority Muslim countries. Extreme nationalist ideologies are feeding the American public discourse with xenophobic rhetoric that instigates fear against foreigners, immigrants and refugees.”

“Personal sin is freely chosen,” a notion that would seem to include racism, said retired Bishop Ricardo Ramirez of Las Cruces, New Mexico, Nov. 13, but “social sin is collective blindness. There is sin as deed and sin as illness. It’s a pervasive illness that runs through a culture.” Bishop Fabre responded that the proposed letter refers to institutional and structural racism.

An amendment from Bishop Ramirez to include this language in the pastoral was accepted by the bishops’ Committee on Cultural Diversity in the Church, which guided the document’s preparation.

Bishop Curtis J. Guillory of Beaumont, Texas, said Nov. 13 the pastoral “gives us a wonderful opportunity to educate, to convert,” adding that, given recent incidents, the document should give “consideration to our Jewish brothers and sisters.” Bishop Fabre replied that while anti-Semitism is mentioned in the document, future materials will focus on anti-Semitism.

A proposed amendment to the pastoral to include the Confederate battle flag in the pastoral alongside nooses and swastikas as symbols of hatred was rejected by the committee.

“Nooses and swastikas are widely recognized signs of hatred, the committee commented, but “while for many the Confederate flag is also a sign of hatred and segregation, some still claim it as a sign of heritage.”