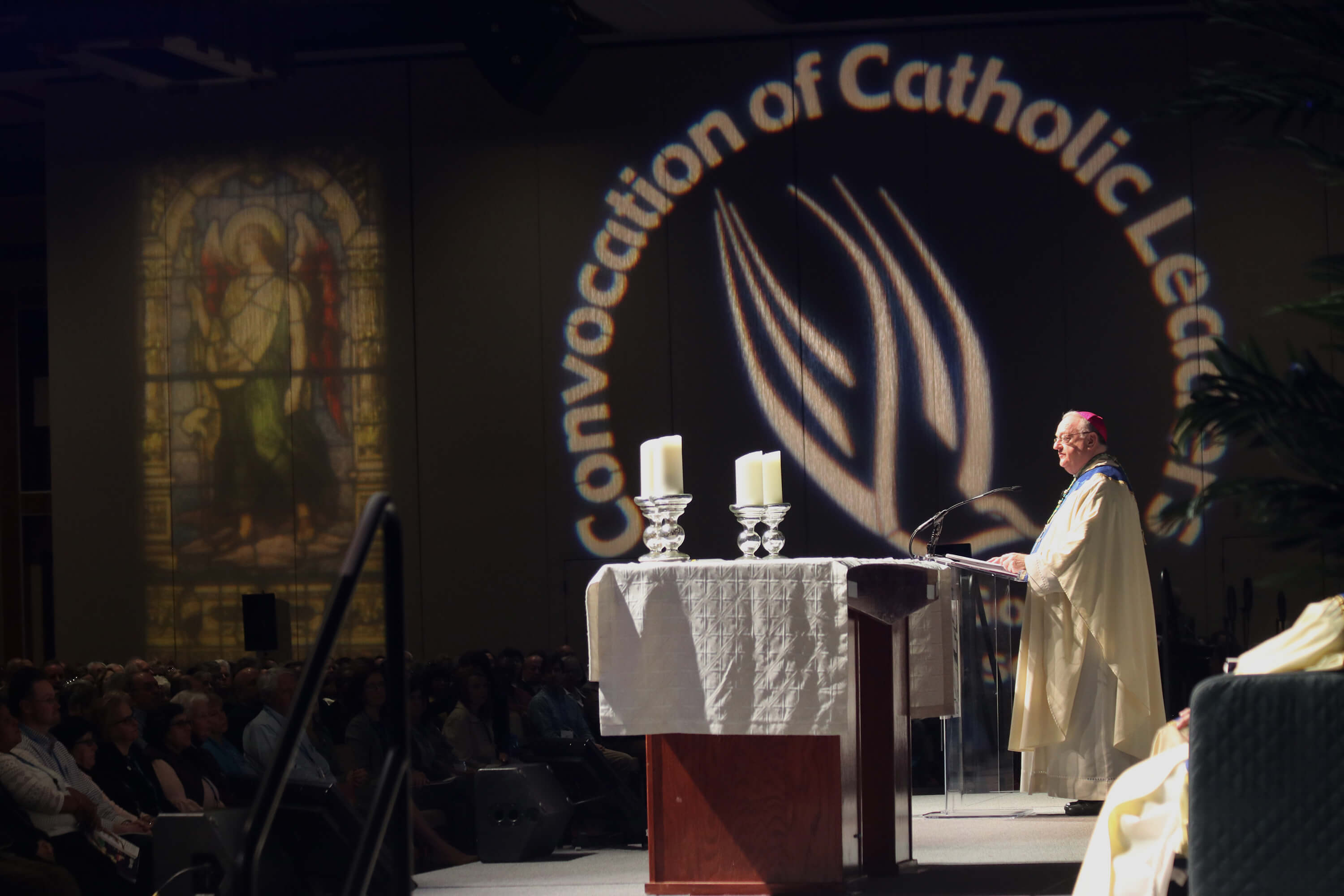 Baseball is back for the spring and Bishop Dennis J. Sullivan of Camden, New Jersey, didn’t hesitate to remind the 800 people who joined the Diocese’s recent follow-up to the 2017 national convocation of Catholic leaders that it’s a new season for the Church as well.

“Today is opening day for your Church,” Bishop Sullivan told clergy, religious and lay leaders at the closing Mass of the four-day “Convocation of Catholic Leaders: The Joy of the Gospel in South Jersey” at Harrah’s Waterfront Conference Center in Atlantic City.

“We have spent the last four days listening to many voices who have come here to speak to us and listening to one another in our breakout sessions and at our parish tables,” he continued. “Now it is time to … walk as missionary disciples … to walk as leaders … so that our Catholic Church in South Jersey may flourish with the joy of the Gospel.”

The event’s roots go back to Pope Francis’ 2013 apostolic exhortation, “Evangelii Gaudium” (“The Joy of the Gospel”), which called the faithful “to embark upon a new chapter of evangelization marked by this joy, while pointing out new paths for the church’s journey in years to come.”

Four years later, in July 2017, a national convocation inspired by the document took place in Orlando, Florida, organized by the U.S. Conference of Catholic Bishops. It featured speakers and workshops to create fertile soil for missionary discipleship throughout the United States.

Bishop Sullivan and 23 delegates from South Jersey who traveled to Florida enthusiastically returned to the Camden Diocese and quickly prepared for the March 25-28 diocesan convocation, which hosted teams from each of the diocese’s 63 parishes.

The event became a celebration of faith and served as an emphatic call to missionary discipleship, with an openness to dialogue, creative thinking and envisioning new ways the local church can proclaim the Gospel in the future.

Each pastor in the diocese chose 10 delegates from his parish to attend. Ideally, they were to represent different heritages, backgrounds, ages and viewpoints. There also was an effort to seek parishioners who have gifts and talents that have not yet been realized on the parish level.

Donna Ottaviano-Britt, diocesan director of missionary discipleship, will meet with each parish to discuss strategies on implementing a sustained culture of encounter and discipleship in their communities.

“This is not a winding down, but a winding up,” Father Chris Mann, pastor of Christ the Redeemer Parish in Atco, said afterward.

Leadership consultant Christopher Lowney was among the gathering’s plenary speakers. His book, “Everybody Leads,” was required reading for the delegates in advance of the convocation.

“People need to see the work of the Lord in us,” Lowney said, stressing the importance of “intentional leadership.” He urged participants to not be afraid to step out of their comfort zones, past their familiar places and faces, to evangelize. “Get your shoes dirty for Jesus,” he said.

“On July 25 last year, my husband died,” she said. “On this past Feb. 25, my son Andy passed away from a long battle with liver disease.”

Her grief almost prevented her from traveling to Atlantic City, but it was her surviving son and daughter who told her to go, knowing that the longtime volunteer and past director of adult catechesis would find healing.

She did, along with a renewed purpose for her mission. “This week has filled me and showed me that God wants me to keep moving and be joy-giving like Jesus. He’s not done with me,” she told the Catholic Star Herald, newspaper of the Camden Diocese.

The diversity and unity of the church were evident during the four days.

“Coming to the United States from the Dominican Republic, I would sing church songs here in English,” said Marianela Nunez, who was part of the Convocation Steering Committee and is director of Latino enrollment for the diocesan Office of Catholic Schools. “At Harrah’s, I saw English-speaking Catholics now singing Spanish songs during Mass.”