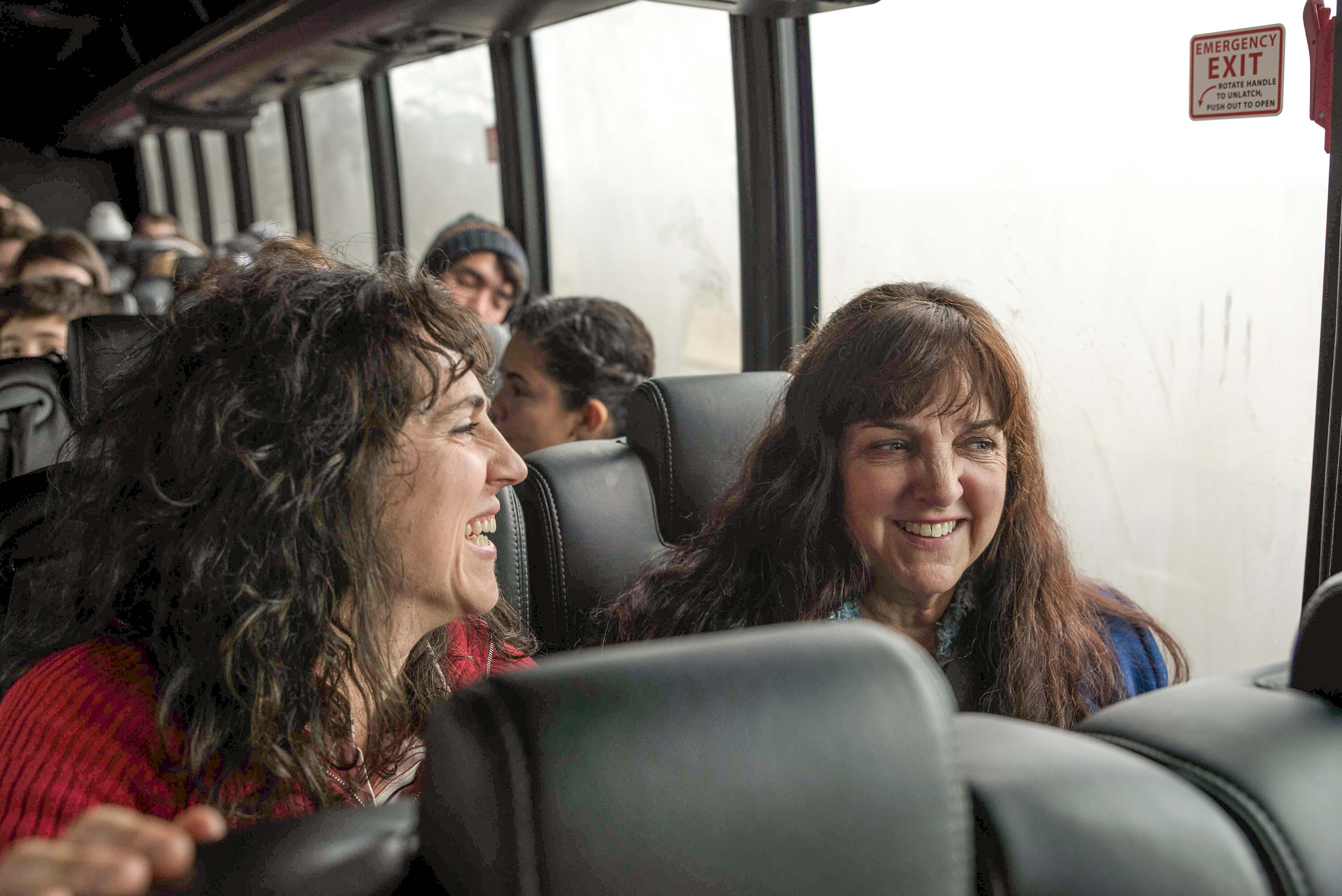 Photo Credit: CNS/Zoey Maraist, Arlington Catholic Herald - Carole Tessier rides with her birth mother, Margaret Teece Nagella, to the March for Life in Washington Jan. 18. Tessier met her birth mother for the first time almost a year ago. A few weeks after abortion became legal in the United States Jan. 22, 1973, Nagella, then 18, realized she was pregnant with Tessier. The oldest in a Catholic family of nine from Ravenna, Ohio, she knew from the beginning that she would carry her child to term and find an adoptive family.

Birth mother, daughter who reunited a year ago march for life together

The bus ride from Fairfax to Washington took only half an hour. But for two of the passengers, the trip was about 45 years in the making.

Carole Tessier met her birth mother, Margaret Teece Nagella, almost a year ago. Now they were traveling together to the annual March for Life.

Abortion became legal in the United States Jan. 22, 1973. A few weeks later, an 18-year-old high school senior in Ravenna, Ohio, realized she was pregnant. Margaret, the oldest of a Catholic family of nine, knew from the very beginning that she would carry her child to term.

“There was no question in my mind. I really didn’t even consider abortion,” she said. “I knew it was an option, but it wasn’t an option for me.”

Still, she was scared and overwhelmed. The baby’s father was deployed overseas. She was hesitant to tell her parents. So Margaret went to Birthright, a pregnancy resource center, who then brought her to Catholic Charities. With the support of a woman from adoption services, she told her parents about the pregnancy.

“(She) went to my parents’ home, and we broke the news to (my mom.) My dad came home from work and he wanted to know who that lady was talking to my mother in the kitchen,” she told the Arlington Catholic Herald, newspaper of the Diocese of Arlington, Virginia. Her parents came with her the day she formally signed the papers to place her baby for adoption.

“It was kind of a family decision,” said Margaret.

After her baby was born, Margaret’s life continued. She got married and had three sons. But Carole, who was adopted by a local couple, wasn’t far from her mind or her home.

“My friend was a substitute teacher in the school where (Carole) went and he figured out she was my daughter because we looked so much alike,” said Margaret. “He told me her name and that she had an adopted brother.”

Some years later, she thought she saw Carole in the local newspaper. But she didn’t reach out right then.

“I think God showed that to me so I could have a little bit of peace that she was doing OK,” she said.

In 2017, Carole was doing some online shopping when she saw a deal for Ancestry.com. Knowing her adoptive mom was interested in testing her own DNA, Carole bought her a kit. And then, after a quick moment of reflection, Carole bought one for herself.

A few months later, she was sitting at her computer when the results came to her inbox. In addition to her heritage, she found the name of her mother and grandmother.

“I started shaking,” she said, “and I was yelling to Rob,” her husband. Carole soon found their addresses and sent them each a letter and photos. Then she waited.

“A few years before all of this happened,” said Margaret, “I had a feeling in my spirit that one day my daughter might try to find me, and it would happen through my mother.

“One day at work, my mother calls me and she was beside herself with excitement. I went to my mom and sat in her kitchen with her. She had the letters and photos that Carole sent. She had put one in a frame, and she had mapped out the route to Carole’s house. She was good to go.”

Margaret and her mother, Irene Teece, sent a bouquet of multicolored roses to Carole to let her know they would get in contact soon. First Irene sent a letter. Then Margaret.

“I took my time because I wanted it to be special. I wrote an eight-page letter,” she said, telling her daughter a little bit about herself. Margaret mailed it on her late father’s birthday, March 5. Weeks later, Margaret, Irene and Carole met at an Olive Garden in Washington, Pennsylvania.

What followed was nearly a year of getting to know one another. Carole met many of her biological family members, and her adoptive family and friends met them.

“When I first met her, I told Carole that I felt like Moses’ mother,” said Margaret. “She sacrificed her son to give him a better life and I felt the same with Carole. I felt I had to offer her up to somebody who could give her the life that she deserved,” she said.

Carole was always thankful. “She chose life for me when many others in her shoes might not have. I have always felt so incredibly blessed because of her selfless act and have always felt this previously unknown mother was a hero. Now, God has given me this most amazing gift by allowing me to finally know and love her,” she said.

As the women told their story, other riders on the bus, kids and adults from All Saints Church in Manassas, Virginia, sang songs and ate chicken sandwiches.

Seven of the Tessiers’ nine children, ages 4 to 19, joined their parents and grandmother on the ride.

Interrupting the chatter, Rob Tessier, youth minister at All Saints, spoke into the microphone to announce that they would soon be praying a rosary. He also introduced Margaret.

“My wife was adopted after a crisis pregnancy. My kids and my wife would not even be here if it wasn’t for somebody we discovered this past February — Margie, who’s with us today. She’s pro-life, obviously,” he said. “(Without) the ‘yes’ that Margie said, I wouldn’t have my kids or my wife. So I’m very grateful,” he said looking toward her. “Thank you very much.”