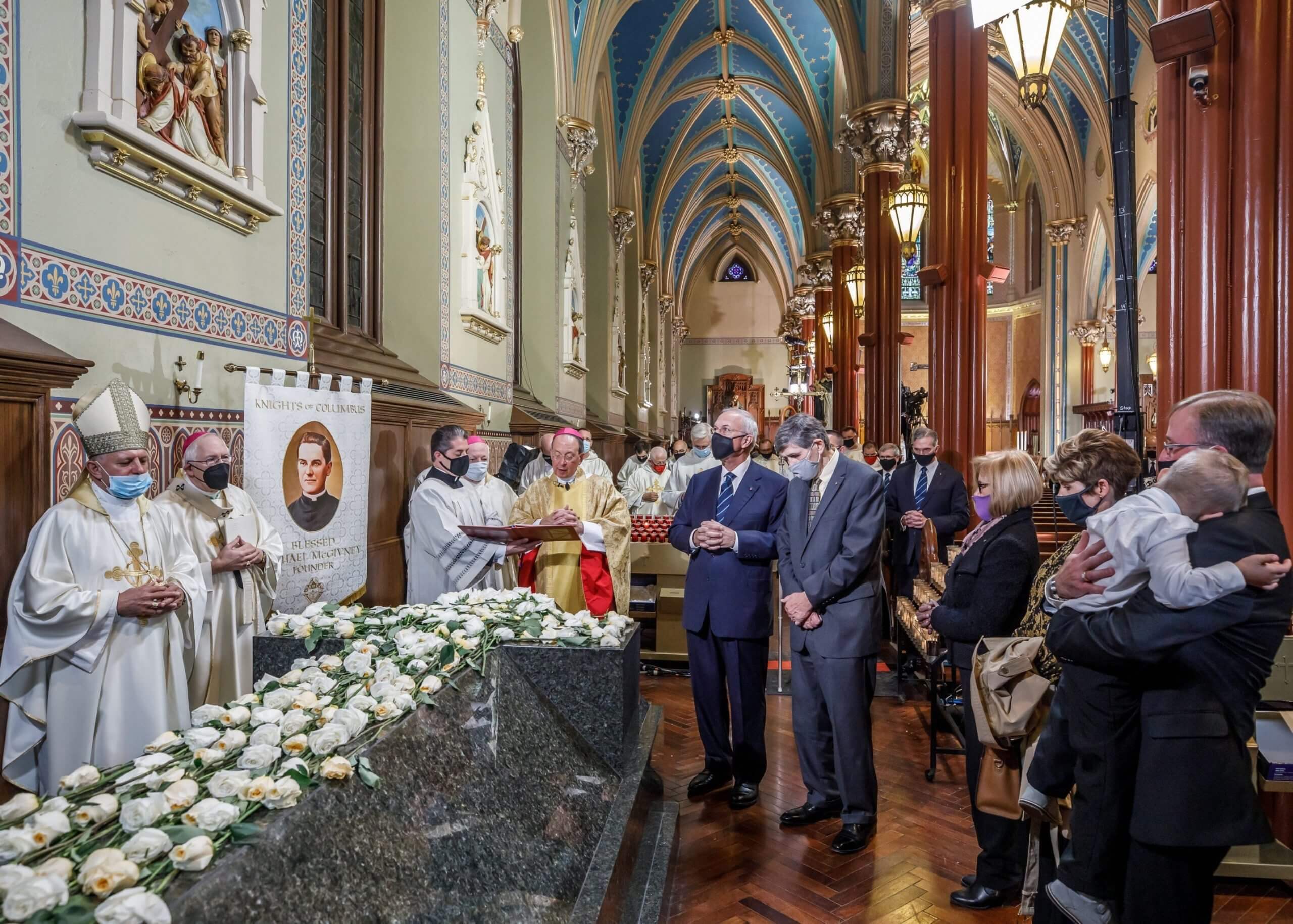 Photo Credit: CNS/courtesy Knights of Columbus - Baltimore Archbishop William Lori, Supreme Knight Carl Anderson and members of the Schachle family pay their respects Nov. 1 at the sarcophagus near the entrance of St. Mary Church in New Haven, Connecticut, where the remains of Blessed Michael McGivney are entombed.

Blessed Michael McGivney was a priest of the Eight Beatitudes because he lived them “so consistently and thoroughly” as a parish priest and as the founder of the Knights of Columbus, said Baltimore Archbishop William Lori, the Knights’ supreme chaplain.

“Father McGivney led his parishioners to holiness and continues to provide for parish priests a model, a pattern for the renewal of priestly life — a renewal that is so urgently desired by the people of God,” the archbishop said in his homily during the Nov. 1 Mass of thanksgiving for the beatification of Father McGivney a day earlier.\

Archbishop Lori was the principal celebrant of the Mass at St. Mary’s Church in New Haven, Connecticut, the parish where Blessed McGivney served for seven years and founded the Knights of Columbus in 1882. His remains are entombed in a sarcophagus near the entrance of the church.

Blessed McGivney (1852-1890) is the first American parish priest to be beatified.

In remarks at the beginning of Mass, Archbishop Blair said the Mass of thanksgiving “very appropriately falls” on All Saints’ Day at a church “dear to the Knights of Columbus.”

During his ministry in the parish, Blessed McGivney “showed the kind of man and the kind of priest that he was,” Archbishop Blair said. “When he left here in 1884, the New Haven Evening Register observed there’d never been a more energetic or hardworking priest stationed in New Haven than he.

“At his farewell, it was reported that parishioners wept aloud and others sobbed audibly in this very place which now so many years later is filled with joy today. … Blessed Michael McGivney pray for us.”

In looking at Blessed McGivney’s life “through the lens” of the Eight Beatitudes, from Christ’s Sermon on the Mount, Archbishop Lori said the “beloved founder of the Knights” was “the quintessential parish priest.”

“When we hear Jesus say, ‘Blessed are the poor in spirit, for theirs is the kingdom of heaven,’ we immediately recall how Father McGivney gave up everything to serve the church — his time, his energy, his resources, taking very little in return and giving of himself until his last moment,” Archbishop Lori said.

Blessed McGivney died of pneumonia complications at age 38 in 1890; he fell ill while caring for the faithful during an outbreak of influenza known as the Russian flu in Thomaston, Connecticut.

“‘Blessed are those who mourn, for they will be comforted.’ Do we not recall how Father McGivney mourned over the plight of families that had lost husbands, fathers and breadwinners?” the archbishop said.

“Do we not find Father McGivney at the bedside of dying parishioners, many of them young sharing like a good shepherd … in the grief and sorrow of the people he served?” he asked.

“A young Father McGivney walked to gallows with a condemned Jim Smith and (served as) deacon at his execution,” Archbishop Lori said. “Now the Good Shepherd himself comforts Father McGivney in eternity.”

Blessed McGivney often visited James “Chip” Smith in his jail cell as the prisoner awaited execution for the murder of a police chief.

In that cell, “with loving perseverance, Father McGivney brought Jim Smith to conversion and thus ushered a condemned man to the very throne of mercy, God’s mercy,” Archbishop Lori said in referencing the beatitude “Blessed are the merciful, for they will be shown mercy.”

Regarding the beatitude “Blessed are the clean of heart, for they will see God,” Blessed McGivney built on “the sense of modesty he learned at home” and it flowered “into a life of chaste celibacy for the kingdom of God,” Archbishop Lori said.

A fellow priest described Blessed McGivney as having an “unassuming character” and as one “who sought not fame or clerical advancement but only the opportunity to serve,” Archbishop Lori said, adding that this illustrates how the priest live out the beatitude “Blessed are the meek, for they will inherit the land.”

“When it became apparent the Knights would be successful, Father McGivney stepped away from the limelight,” continuing to support the order not as its leader but “as a holy priest who sought only the material and spiritual well-being of his beloved Knights and their families and to put them on road to holiness,” the archbishop continued.

There were times when Blessed McGivney had to be a peacemaker among these new Knights, he said, which brings to mind the beatitude “Blessed are the peacemakers, for they will be called children of God.”

“Father McGivney found himself at times dealing with challenging personalities as well as that pride and jealously that seem to be a part of every noble undertaking,” he said.

“By all accounts,” he added, “Father McGivney responded to these challenges with a disarming humility, a persevering charity, tranquility of spirit and a wisdom that lent him the authority he needed to settle disputes, to restore peace and to keep his fledgling order, the Knights of Columbus, on track.”

He also at times was ridiculed as he “labored long and hard” to establish the Knights, embodying the beatitude “Blessed are they who are persecuted for the sake of righteousness,” Archbishop Lori continued. “Father McGivney was regarded as something of a laughingstock, and others … thought his project posed grave dangers for the church’s future.”

“Father McGivney’s response was neither anger nor recrimination but rather steady determination and focus, confident that if it were God’s will, the Knights would succeed perhaps beyond his dreams,” the archbishop added.

Blessed McGivney originally started the Knights as a service organization to help widows and orphans. Today the fraternal order for Catholic men is international and is the largest lay Catholic organization in the world with 2 million members. The order sponsors a wide range of educational, charitable and religious activities.

“Father McGivney provides the Knights with a roadmap to the future as the order continues to seek to help men become better husbands, better fathers and convincing witnesses to the Gospel in these challenging times,” Archbishop Lori said.

“For now however, let us rejoice and be glad,” he said, “or among the holy ones who shine like stars for all eternity is a beloved parish priest and the visionary founder of our order on whose shoulders we continue to stand. Blessed Michael McGivney pray for us.”

Baltimore Archbishop William Lori, Supreme Knight Carl Anderson and members of the Schachle family pay their respects Nov. 1 at the sarcophagus near the entrance of St. Mary Church in New Haven, Connecticut, where the remains of Blessed Michael McGivney are entombed.