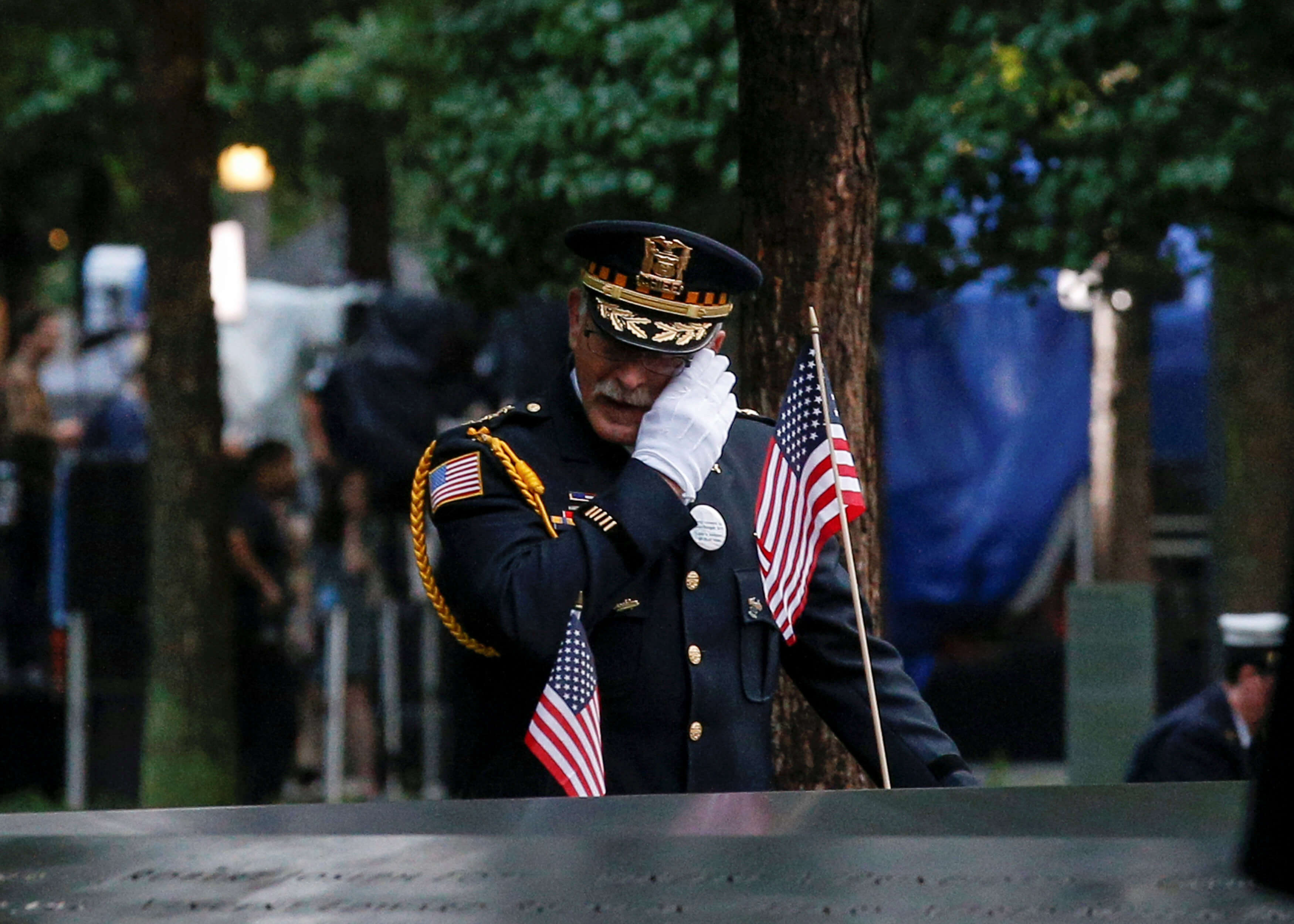 Anniversary of 9/11 marked with moments of silence, prayer, Masses

Churchgoers around the United States once again marked the anniversary of the 9/11 terrorist attacks with moments of silence, special prayer services and Masses.

In Brooklyn, New York, a Mass for fallen heroes was celebrated at the Co-Cathedral of St. Joseph Sept. 11.

The Mass followed a procession of firefighters from across the country who first gathered at ground zero in Lower Manhattan, where the twin towers of the World Trade Center once stood. They marched in single file across the Brooklyn Bridge carrying 23 ceremonial flags of the New York City Fire Department. Each flag represented one of 23 firefighters from Battalion 57 in Brooklyn killed in the line of duty at the trade center.

The journey from ground zero to Brooklyn served “to symbolically bring the brothers back home,” said organizers. The procession included a ceremonial flag for every New York City firefighter killed that day and an American flag “in remembrance of all who died that day.”

Led by fire trucks and motorcycles, the procession went past several firehouses on the way to the co-cathedral.

Official ceremonies took place at the sites in New York, Virginia and Pennsylvania where four hijacked planes crashed 17 years ago, claiming the lives of 2,996 people (including the 19 hijackers).

Two planes flew into the World Trade Center in New York, bringing down the twin towers and killing office workers and other staff in the buildings, emergency first responders and people fleeing in the streets.

Another plane crashed into the Pentagon in Virginia, just outside Washington, and a fourth airliner went down in a field near Shanksville, Pennsylvania.

Attending a meeting of the U.S. bishops’ Administrative Committee Sept. 11 in Washington, New York Cardinal Timothy M. Dolan said he and his brother bishops remembered all those who perished and their families at a Mass at the U.S. bishops’ conference headquarters.

A week earlier, he said in a statement, he had celebrated Mass at historic St. Peter’s Church in downtown New York. The “venerable church,” he noted, had “served as a sanctuary, first-aid station, hospice, relief center and even a mortuary” on 9/11 and for many days afterward.

It was there that the body of Father Mychal Judge, the fire department chaplain, among the first to die in the attack, “was reverently placed upon the altar.” The Franciscan priest died ministering to victims in the rubble of the World Trade Center.

During Mass at St. Peter’s, Cardinal Dolan said, the congregation “prayerfully remembered with sorrow, reverence and love those who had perished that unforgettable day, and their families who still grieve, along with those who have since lost their lives due to illnesses contracted during the rescue and recovery efforts that followed.”

The attacks have claimed the lives of a number of people who helped clear the wreckage afterward, as cancer and other conditions caused by toxic smoke have begun to emerge.

Cardinal Dolan recalled that nine years ago he was in New York for his first 9/11 anniversary observance, some months after he was installed as archbishop of New York. He was at St. Peter’s then too.

“Never will I forget the wise comment of the pastor at the time, Father Kevin Madigan,” Cardinal Dolan said. The priest told him: “9/11 was Good Friday again here in New York; but the story we need to remember is actually 9/12, a real Easter, as this community rose in rescue, relief, support, rallying and rebuilding.”

In 2015, during his pastoral trip to the United States, Pope Francis visited the site of the 9/11 attacks in Lower Manhattan. He said the grief remained “palpable.”