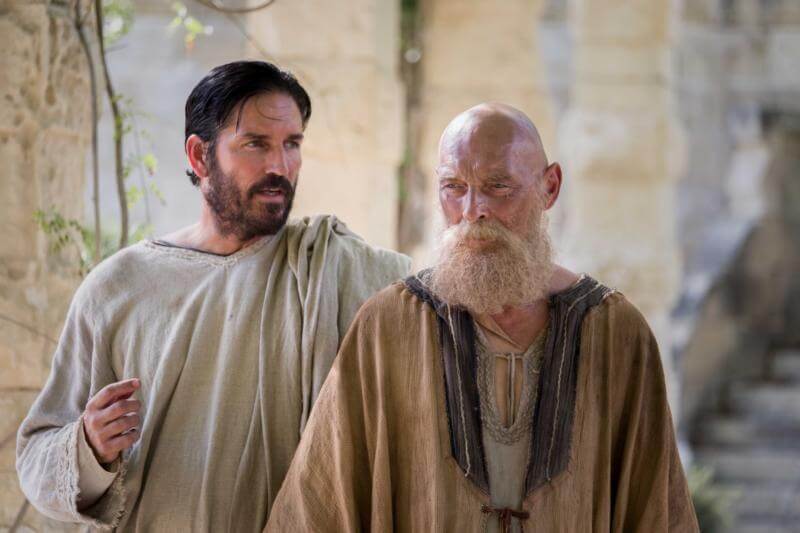 Photo Credit: (CNS photo/Sony Pictures) - Jim Caviezel as Luke and James Faulkner as Paul are seen in the film "Paul, Apostle of Christ." "His message of love and life and mercy is so important for us today," said Eric Groth, one of the executive producers of the new movie.

James Faulkner, the British actor in the title role of St. Paul in the upcoming movie “Paul, Apostle of Christ,” isn’t taking a lot of credit for his portrayal.

“I didn’t play Paul, it played me,” Faulkner told Catholic News Service during a recent telephone interview from London. “I was imbued with the spirit of Paul and I found it transforming.”

Faulkner, a lifelong Anglican, attributed this, at least in part, to writer-director Andrew Hyatt: “I felt I had been transformed by Andrew’s script and his direction. And an entire page of notes on how to play Paul — nothing precise but overall notes on how I should approach it. I’ve never had a director do something so tellingly about a character.”

It’s not as if Faulkner had a lot of time to prepare for the part. “My manager called me and told me, ‘This is a fabulous script. I’ve had you in mind for months. Read it and come straight back to me.’ I read it and got back to him.”

Faulkner said he recalled saying to his manager, “It’s wonderful.” His manager replied, “You’re on a plane to Malta in three days’ time. Good luck.”

His preparation had to be quick. “I had a really good grounding in the religion as a schoolboy. I was relatively familiar with the New Testament. One thing I was able to do was read the letters before I started ‘Paul,’ not the stories, but from his hand. That was very useful.”

When he arrived in Malta, “I had three days’ rehearsal with Jim (Caviezel, who plays St. Luke) and Olivier Martinez (who plays Roman prison warden Mauritius). I insisted on a table read. I wanted us to sit down and read it together. I’m the last person to be cast. I don’t know anybody on the film. I want to meet absolutely everybody. There’s a company of players on the film and we should get to know each other as much as possible given the schedule.”

The film was shot in 23 days. Faulkner’s parts were shot in just nine days, he said. “Once I started shooting, I was in it. Long days, and we fortunately, in a sense, had split days — midday to midnight or 2 a.m. — so I had a couple of hours every morning to review the text to the rest of the day because I was certainly too tired to read it” at night. Learning lines, he added, is “the great trial of the actor.”

On his final day of shooting, Faulkner told CNS, he did 16 scenes, including — spoiler alert — his beheading.

Faulkner also read each of Paul’s letters for a companion audiobook to be released by the American Bible Society.

Television viewers may be familiar with his sonorous voice from cable. “For seven years I was the voice of the History Channel,” Faulkner said. He also did voiceovers for the National Geographic Channel and for ITV News in his native England.

He said his voice got that deep from, believe it or not, singing. He had been singing in church and school choirs from age 7. “My voice didn’t break until I was damn near 16,” Faulkner said. His choirmaster at the time recommended he rest it for two or three years, but the strong-willed Faulkner ignored the advice and shortly became what he calls a “foghorn baritone.”

Faulkner’s recent credits include “Game of Thrones,” “Da Vinci’s Demons” and one season of “Downton Abbey.” “April 1, 2014, my agent called me to tell me I’d been offered a role in ‘Downtown Abbey.’ It wasn’t an April Fool’s joke. It was real,” he said.

This year, April 1 is also Easter Sunday, and “Paul, Apostle of Christ” will have been out for a week in cinemas in the United States and at least a dozen other countries; the publicity schedule is longer than the filming schedule. What does he expect to be doing this April 1? “Heaven knows,” Faulkner said. “I don’t.”