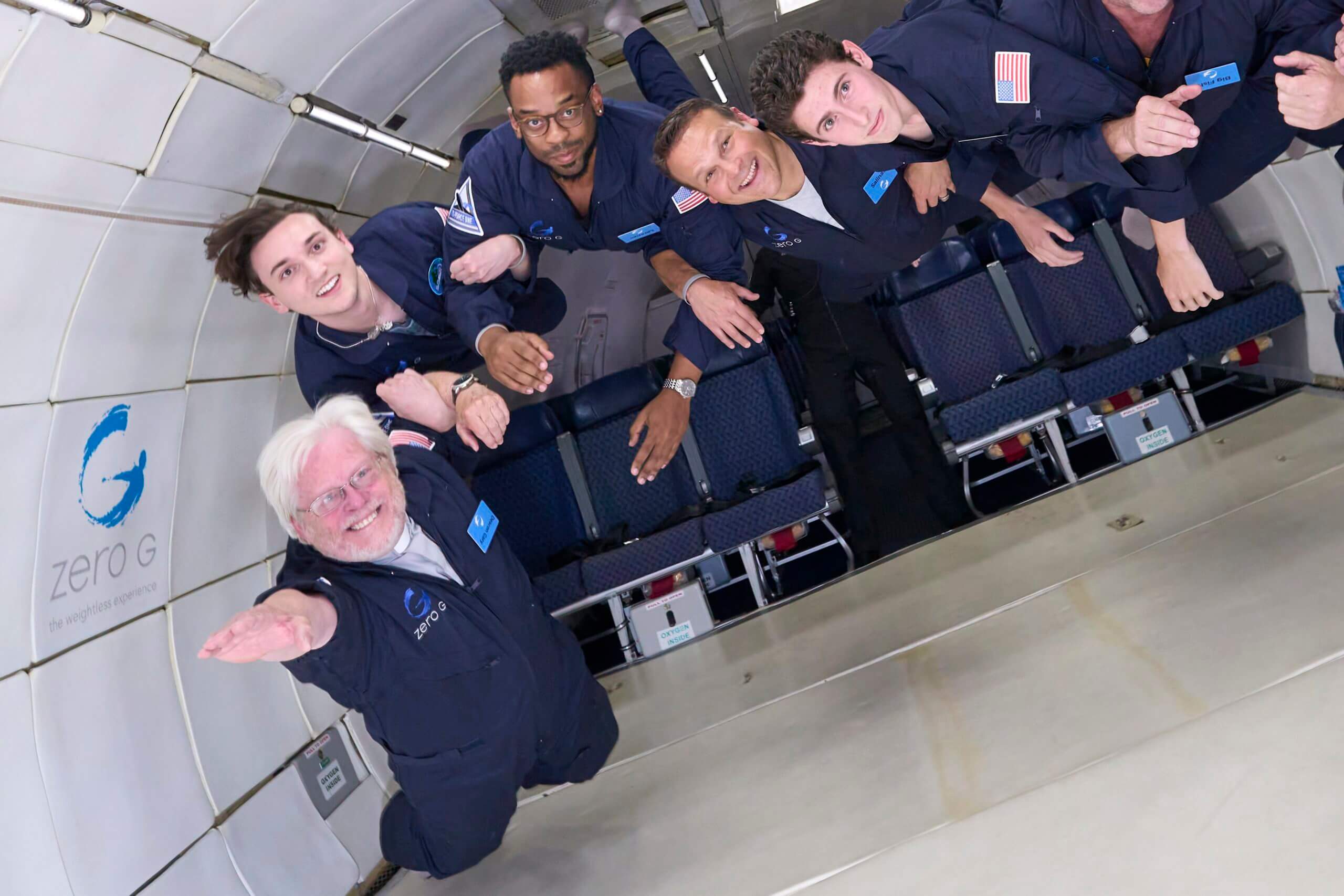 Deacon Gary Nosacek doesn’t hesitate when he gets to take his ministry outside the walls of the church.

His most recent adventure July 11 found him floating weightless at 35,000 feet — wearing his clerical collar no less.

It was hardly the edge of space, but for Deacon Nosacek, it was the next best thing. And it ticked off a bucket list item he has eyed since childhood.

In doing so he became another ordained Catholic clergyman to experience zero gravity, or zero-g.

The opportunity came with the Zero Gravity Corp., or Zero-G, the only U.S. company certified by the Federal Aviation Administration to take the general public into the sky to experience what astronauts experience in Earth orbit.

“I wanted to do it since 2002,” said Deacon Nosacek, 66, who was ordained in 2014 and ministers at Three Holy Women Parish in Milwaukee.

At least one other clergyman has joined a Zero-G flight. Father Stephen Josoma, pastor of St. Susana Parish in Dedham, Massachusetts, flew with a group of people in November 2005.

The Russians in the early 2000s offered a flight that flew high enough to see the distinct curvature of the earth. But the $18,000 price tag plus the expense of getting to Russia was too steep for the onetime children’s radio show host.

When he learned about the Zero-G company’s series of flights from airports around the country, he knew he had to sign up. Convincing his wife, Cindy, a retired family practice physician, was easy.

“She knew that since 2002 I’ve been whining about not being able to go to Russia, so she was not surprised when I told I wanted to do this,” Deacon Nosacek told Catholic News Service.

Adventure is the norm for the Milwaukee native.

After becoming a deacon he was the Archdiocese’s circus and rodeo minister, working with people who find it difficult to attend Mass because of their show schedule but wanted some connection with their Catholic faith.

Deacon Nosacek said it was Milwaukee Auxiliary Bishop Jeffrey Haines who teased him into making the trip to the heavens. “He kept telling me, ‘We haven’t had a guy in space.’ He mentioned it whenever we saw each other. He’d say ‘How’s space going?'” the deacon said.

The zero-gravity flight originated at Las Vegas McCarran International Airport. Deacon Nosacek was among two teams of passengers who boarded a modified Boeing 727 for the hourlong journey. The aircraft flies between 24,000 and 35,000 feet, the same height as commercial jetliners.

To create the weightlessness the plane flies in roller coast-like patterns called parabolas. The flight completed 15 parabolas. Any more than that and the inexperienced passengers could feel physically stressed, Deacon Nosacek explained.

Prior to the flight, participants are sent a video that explains what happens and asked to watch it multiple times. At the airport, flight parameters are reviewed again. Trainers instruct the paying customers — at $7,500 per “seat,” according to the company website — to let weightlessness come naturally. They are advised not to push off from the floor of the plane because a person could easily become injured by jamming his or her head into the ceiling.

Deacon Nosacek skipped offering a prayer for the group before the flight, sometimes nicknamed the “vomit comet.” “People would have been nervous if you had a clergy blessing the plane,” he laughed. But he did pray silently before boarding.

After takeoff, the plane gradually climbs to 24,000 feet and levels off for a few minutes allowing passengers to become accustomed to their surroundings. The pilot then takes the plane on a steep ascent to 35,000 feet, causing passengers to feel 1.8 times the force of gravity. As the plane crests, the pilot sends the plane into a rapid descent that provides up to 30 seconds of weightlessness.

Lying on the floor of the plane with the other passengers, Deacon Nosacek found that “suddenly gravity is gone and you float off.” Trainers instruct participants to “fly like Superman” and not to push off or try to swim during the first few weightlessness periods because they will accelerate their movement uncontrollably.

After a few times people are able to move around a bit more easily and even turn somersaults and perform simple tricks.

It definitely takes practice to get the feel for being in zero gravity, he said.

At his parish, Deacon Nosacek plans to mine his experience for homilies and presentations to students at the parish school. “I hope to inspire kids to think about science,” he said.

Adults, too, he hopes can learn from his experience.

“I want to help people realize the Church is everywhere. This takes the idea of the universal Church to a whole new level.”