History of the Diocese Burlington

The Diocese of Burlington includes the entire state of Vermont.  The northern border is the Province of Québec, Canada.  Vermont’s western border with New York State includes some 100 miles of Lake Champlain.  The Connecticut River and the State of New Hampshire on the east and the State of Massachusetts to the south complete Vermont’s borders. The Church developed slowly through three phases. The early period of evangelization and missionary activity planted the seed and set down roots. Catholicism in Vermont came of age with the establishment of the Diocese of Burlington in 1853. The third, contemporary phase began after about 1965 with efforts to implement the renewal of the Second Vatican Council.

The history of Catholicism in Vermont began in July of 1609 with the arrival of Samuel de Champlain, a Catholic explorer who named the land for its green mountains – Voilà les monts verts!.  He was probably the first white man to sail down Lake Champlain at that time.  Early French-Canadian settlers then called it Lac des Iroquois, as the land on both sides was occupied by the Iroquois.  By the time the first serious white settlers came into the Champlain Valley fifty years later, the Algonquins had taken over the territory.

Burlington, which is named for its pioneer landholders, the Burling family, was chartered in 1763 and organized in 1797.  Though officially part of the Diocese of Baltimore, the Bishop of Québec oversaw the spiritual interests of early Catholic setters and Native Americans until Burlington became part of the newly-erected Diocese of Boston in 1808.

In 1830, the 14th State received its first resident when Bishop Benedict Fenwick of Boston sent the energetic Reverend Jeremiah O’Callaghan.  Under Father O’Callaghan’s guidance, Vermont gained five priests, ten churches, and twenty thousand Catholics by 1853 when the Holy See created the Diocese of Burlington as a new diocese within the Province of the Archdiocese of New York.

The Diocese of Burlington – comprising the 9,135 square miles of the State of Vermont – became a suffragan of the See of Boston upon its establishment as Archdiocese in 1875.

The year before Champlain arrived in Vermont, the explorer had engaged the Society of Jesus to evangelize the Native Americans in the new lands, but the Jesuits did not arrive until the year after his death. One of them was St. Isaac Jogues (1607–46) who passed through Vermont on at least four journeys between New York and Quebec in the years before his martyrdom. Among his stops as a captive was the little island on Lake Champlain where he was tortured and where later Jesuit missionaries offered Mass.

Before Sieur de La Motte constructed a fort on the island that bears his name, Jesuit Simon Le Moyne crossed through Vermont on a diplomatic journey between Quebec and New York in September of 1654 and Jesuit Pierre Raffeix stopped at the Shrine of St. Anne on the Isle La Motte, in May of 1666. Later Charles Albanel joined Raffeix there in September of that year in hearing confessions and offering Mass. In the summer of 1667, Jesuits Jacques Bruyas, Jacques Frémin, and Jean Pierron ministered to some three hundred soldiers on the island near the feast of St. Anne. Of these, Jacques Frémin (1628–91), famous for converting 10,000 Native Americans, was among the founders of the Isle La Motte. 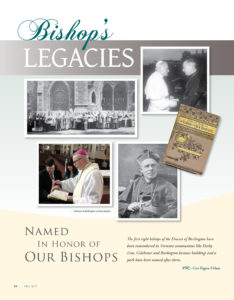 Learn about the legacies of the bishops of the Diocese of Burlington in this Vermont Catholic Magazine article from pages 24-29 of the fall 2017 issue. Click the image to view the full article. 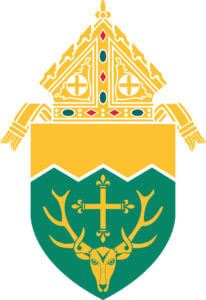 The crest of the Diocese of Burlington